2. The mission projects are vetted and screened.

3. Volunteer teams can continue their relationship with the project site they served at via The Advance and missionaries.

4. All are welcome to serve. 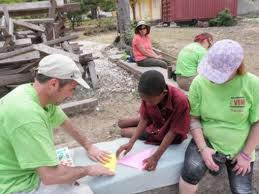 After the devastating earthquake in Haiti in January 2010, the leaders of the Western Jurisdiction set up a plan to respond as a jurisdiction to the Haiti recovery efforts. The plan is called "Operation Resurrection 2010" and it made 4 goals for the WJ to meet in order to aid Haiti after the earthquake.

The first goal was for people of the WJ to learn Haiti, its people, history, and culture. The second goal asked that the WJ send $100,000 to UMCOR for Haiti recovery efforts. The third goal was that 25 UMVIM teams from the WJ would serve in Haiti by 2015. The fourth goal asked that the WJ replace the 23,000 Health Kits that had already been shipped out from UMCOR Depot West.

Debbie Irby, the UMVIM Conference Coordinator for the Yellowstone Conference, recently came back from leading an UMVIM team to Haiti which included Bishop Elaine Stanovsky, Bishop to Yellowstone and Rocky Mountain Annual Conferences. This team marked the 25th team to Haiti from the WJ!!!! As such, the WJ has met its 25 UMVIM team goal just under two years after the Haiti earthquake, well before its 2015 deadline!

Thank you to all the UMVIM Conference Coordinators who have led teams to Haiti and/or been a part of an UMVIM team to Haiti. Many thanks also to all the men and women who have served in Haiti from the WJ! Finally, thank you to the Bishops and leaders of the WJ for their continued support of mission through UMVIM!

The WJ continues to send teams to Haiti. Contact your UMVIM Conference Coordinator and/or Heather Wilson, UMVIM WJ Jurisidictional Coordinator at umvimwj@hotmail.com to see how too can serve in Haiti on an UMVIM team!

Posted by Heather Wilson - UMVIM WJ Coordinator at 11:41 AM Links to this post

WANT TO BE A VOLUNTEER? START HERE! CONTACT YOUR UMVIM CONFERENCE COORDINATOR 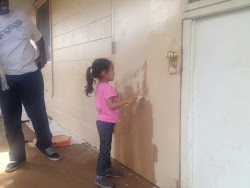 UMVIM =Never Too Old or Too Young to Serve

UMVIM & The Advance - Partners in Mission

Connecting, Serving, & Building Relationships In the Love of Christ